European shipowners welcome the strong cross-party support by the European Parliament for key provisions under the revised Emission Trading System for shipping. ECSA welcomes the Parliament’s commitment to enforce the ‘polluter-pays’ principle, by ensuring the mandatory pass-through of the ETS costs to the commercial operators of the vessels through contractual clauses. ECSA also supports the proposal of the Parliament to create a sector-dedicated fund and to earmark 75% of the revenues generated by the shipping allowances to the energy transition of the sector.

“Although our first preference has always been an international regulation for shipping at the IMO level, European shipowners recognise that the sector should contribute its fair share to address the climate crisis at the EU level as well. The mandatory pass-through of the ETS costs to the entities responsible for operational decisions will ensure the proper implementation of the ‘polluter pays’ principle. Although the position of the Parliament needs to be improved on certain points, it is a significant step forward.” said Philippos Philis, ECSA’s President.

“A lot of work still needs to be done but the outcome of the vote today is a strong signal that the European policy-makers are keen to listen to the proposals of the  shipping sector. The earmarking of the revenues is essential to finance R&D projects and to bridge the price gap between cleaner and conventional fuels. 80% of the current ETS revenues are used for the energy transition of the European economy and we want to see the same happening for shipping. It’s a make-or-break moment for the decarbonisation of shipping and the competitiveness of the sector” said Sotiris Raptis, ECSA’s Secretary-General.

The Parliament has also presented a proposal to address the issue of the ice-class vessels, which is one of the elements highlighted by ECSA’s position. In this regard, European shipowners look forward to engaging with the Parliament and the Council to reach an adequate solution. 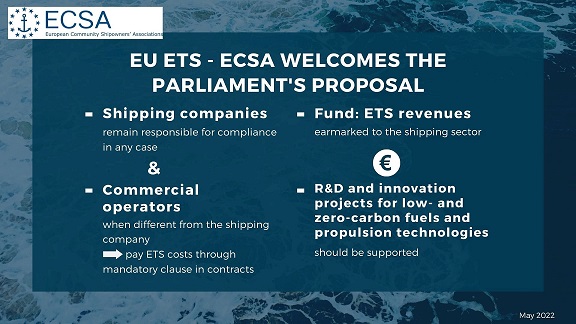 The final vote at the Plenary of the European Parliament is scheduled for June. Negotiations between the Parliament and the Council will be launched once the two institutions adopt their positions.

You can find our policy paper here and the summary here. Our  Framework conditions for an MBM for shipping can be found here.